Pyruvate carboxylase (PC) deficiency is a rare disorder that can cause developmental delay and failure to thrive starting in the neonatal or early infantile period. All patients who develop symptoms in the first weeks and months of life have lactic acidosis.

PC is a biotin-dependent mitochondrial enzyme that plays an important role in energy production and anaplerotic pathways. PC catalyzes the conversion of pyruvate to oxaloacetate. Oxaloacetate is 1 of 2 essential substrates needed to produce citrate, the first substrate in gluconeogenesis. 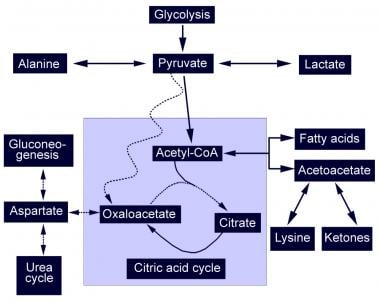 Metabolic acidosis caused by abnormal lactate production is associated with nonspecific symptoms such as severe lethargy, poor feeding, vomiting, and seizures, especially during periods of illness and metabolic stress. In the most severe form, pyruvate carboxylase deficiency results in progressive neurologic symptoms, starting in the neonatal or early infantile period, including developmental delay, poor muscle tone, abnormal eye movements, and seizures. Therapies such as alkalinization can ameliorate the biochemical abnormalities, but cannot prevent the progressive neurologic damage that occurs. PC also has a role in lipogenesis in adipose tissue.

The following types of PC deficiency have been defined
:

Type B – The French phenotype; characterized by neonatal onset, high lactate and ammonia elevation, abnormal lactate-to-pyruvate ratio, and death within the first few months of life

Type C – The benign phenotype; characterized by recurrent episodes of mild to moderate lactate elevation without any neurologic or cognitive symptoms.

Evaluation of the patient by an expert in metabolic and genetic disease is necessary to confirm the diagnosis, guide appropriate treatment, and determine prognosis. Enzyme testing and DNA confirmation are available. Genetic counseling for parents is important in order to discuss the 1 in 4 recurrence risk for future pregnancies.

The patient and the parents should be well educated on the factors that elicit a crisis and the early signs of decompensation.