The orbital apex is the most posterior portion of the pyramidal-shaped orbit, positioned at the craniofacial junction. The anatomy of the orbital apex is significant for the complex association between bony, neural, and vascular elements.
Fractures of the apex rarely are isolated because they occur in the association with or as extension of fractures of the facial skeleton, base of skull, or other more anterior orbital fractures. See the image below. 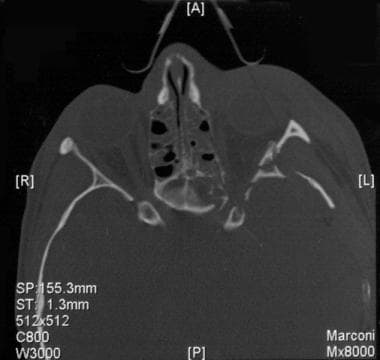 In adults, the canal is 6.5 mm in diameter and about 8-12 mm in length. The canal transmits the optic nerve and the ophthalmic artery. Throughout its intraorbital and intracanalicular course, the optic nerve is surrounded by pia mater, arachnoid, and dura mater, giving the nerve a sheath. Therefore, optic nerve is a white matter tract of the brain and carries with it meningeal coverings. Within the orbit, the optic nerve is quite mobile; however, within the canal, the optic nerve sheath remains adherent to the sphenoid periosteum and thus is fixed.

The SOF is situated between the greater and lesser sphenoid wings, with the optic strut at its superomedial margin. It lies between the roof and lateral wall of the orbit. The SOF is divided at the spina recti lateralis by the annulus of Zinn, the common tendinous origin of the recti muscles. Lateral to the annulus of Zinn, the SOF transmits the lacrimal nerve, frontal nerve, trochlear nerve, the superior ophthalmic vein, and it may transmit a recurrent branch of the lacrimal artery. Within the annulus pass the superior division of III, nasociliary nerve, inferior division of III, abducent nerve, and fibers from the internal carotid sympathetic plexus.