Toxic anterior segment syndrome (TASS) is an acute postoperative inflammatory reaction in which a noninfectious substance enters the anterior segment and induces toxic damage to the intraocular tissues. Almost all cases occurred after uneventful cataract surgery, and, more recently, it has been reported after phakic intraocular lens implantation. Previously, this syndrome was defined by many names, such as sterile endophthalmitis or postoperative uveitis of unknown cause. Furthermore, a condition termed toxic endothelial cell destruction (TECD) syndrome has been described and is now believed to be a variant of TASS. TASS is shown in the image below. 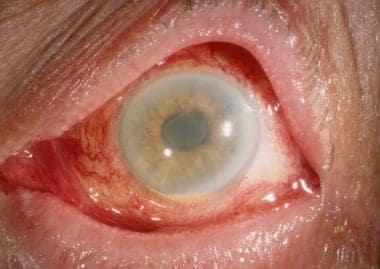