Ductions are monocular eye movements. Movement of the eye nasally is adduction; temporal movement is abduction. Elevation and depression of the eye are termed sursumduction (supraduction) and deorsumduction (infraduction), respectively. Incycloduction (intorsion) is nasal rotation of the vertical meridian; excycloduction (extorsion) is temporal rotation of the vertical meridian. (See the image below.) 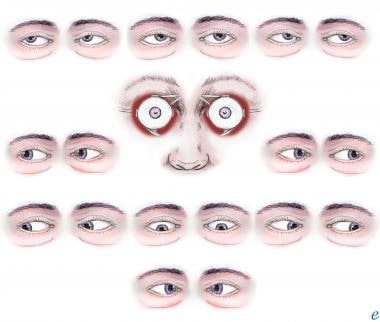 Yoke muscles are the primary muscles in each eye that accomplish a given version (eg, for right gaze, the right lateral rectus and left medial rectus muscles). Each extraocular muscle has a yoke muscle in the opposite eye to accomplish versions into each gaze position. By the Herring law, yoke muscles receive equal and simultaneous innervation. The magnitude of innervation is determined by the fixating eye, which means that the angle of deviation between eyes (strabismus) may vary depending on which eye is fixating. The primary deviation is misalignment, with the normal eye fixating. If the paretic eye fixates, the ensuing secondary deviation is typically larger than the primary deviation.

As opposed to versions (in which both eyes move in the same direction), vergences are movements of the eyes in opposite directions. Convergence is movement of both eyes nasally, and divergence is movement of both eyes temporally. Vertical vergence movements may also occur (ie, one eye moving upward or the other eye moving downward relative to the contralateral eye). Accommodative convergence is convergence of the eyes stimulated by accommodating or focusing on a near target.

Abnormality of the accommodative convergence to accommodation ratio may cause certain types of strabismus.
Fusional convergence and divergence are optomotor reflexes that are designed to position the eyes such that the image of regard falls on the fovea of each eye. This motor fusion is important to avoid diplopia (double vision). The field of action of an extraocular muscle is the direction of rotation of the eye when that muscle contracts. This term also indicates the gaze position in which the effects of a muscle most easily are demonstrated. Knowledge of fields of action is important; strabismus often increases in the field of action of a weak eye muscle.

For patient education information, see the Eye and Vision Center, as well as Anatomy of the Eye.