Anencephaly is a serious developmental defect of the central nervous system in which the brain and cranial vault are grossly malformed. The cerebrum and cerebellum are reduced or absent, but the hindbrain is present. Anencephaly is a part of the neural tube defect (NTD) spectrum. This defect results when the neural tube fails to close during the third to fourth weeks of development, leading to fetal loss, stillbirth, or neonatal death.

Anencephaly, like other forms of NTDs, generally follows a multifactorial pattern of transmission, with interaction of multiple genes as well as environmental factors, although neither the genes nor the environmental factors are well characterized. In some cases, anencephaly may be caused by a chromosome abnormality, or it may be part of a more complex process involving single-gene defects or disruption of the amniotic membrane. Anencephaly can be detected prenatally with ultrasonography and may first be suspected as a result of an elevated maternal serum alpha-fetoprotein (MSAFP) screening test. Folic acid has been shown to be an efficacious preventive agent that reduces the potential risk of anencephaly and other NTDs by approximately two thirds. 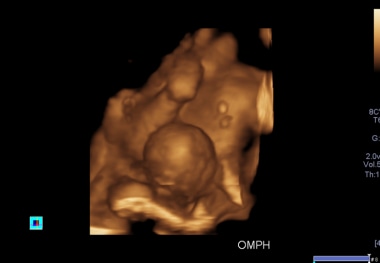 A 3D antennal ultrasound scan shows an omphalocele in one of the conjoined twins, associated with anencephaly in the first trimester, allowing termination of pregnancy.