Atlantoaxial Instability in Down Syndrome

The occiput, the atlas (C1), and the axis (C2) form a functional unit, the occipitocervical articulation, which is characterized by a high degree of mobility and little intrinsic bony stability. Strong ligaments facilitate movement and keep these structures in place. Head rotation occurs primarily at this junction, and the odontoid bone is the axis that allows this rotation.

The atlanto-occipital joints allow movement in extension and flexion. In flexion, an anterior translation of C1 on C2, which normally does not exceed 3 mm in adults, exists. In children younger than 8 years, this translation can be as wide as 5 mm. In pathologic conditions (eg, abnormalities of the odontoid bone or in the ligaments that keep these joints together), this displacement increases and bone structures can pressure the spinal cord, producing clinical symptoms.

In the United States, atlantoaxial instability (AAI) with or without subluxation has been reported in as many as 10-30% of individuals with Down syndrome.

No racial predilection is known for atlantoaxial instability in Down syndrome, and the role of sex is unclear. Most studies suggest a female preponderance
; however, some reports noted a male preponderance,
and others found no difference between men and women.

A negative correlation exists between atlanto-odontoid distance and age.

The following radiographs are provided for comparison between an image with a normal atlantoaxial relationship and that of a mild abnormality in a patient with Down syndrome. 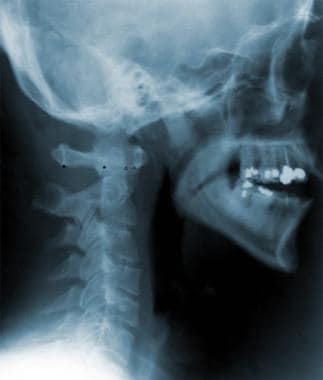 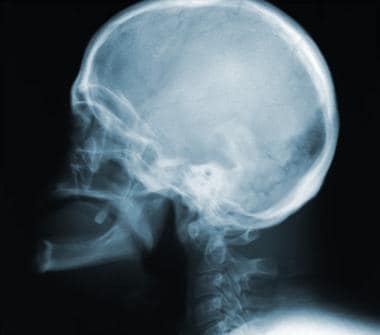 Routine lateral cervical radiograph of a 28-year-old woman with Down syndrome confirmed by chromosomal analysis. The radiograph shows a mild degree of subluxation. The patient had no clinical signs of cord compression.

Alzheimer Disease in Down Syndrome

Ophthalmologic Manifestations of Down Syndrome

Dermatologic Manifestations of Down Syndrome

Pathology of Myeloid Proliferations Related to Down Syndrome