A progressive debilitating neurologic syndrome that is invariably fatal

Pathological changes that are confined to the CNS and consist of the following 3 classic features: spongiosis, gliosis, and neuronal loss

On December 23, 2003, targeted surveillance identified a “downer” dairy cow (ie, nonambulatory and disabled) that tested positive for BSE. This was confirmed by the BSE International Reference Laboratory in Weybridge, England, on December 25. On December 9, 2003, the downer dairy cow had been slaughtered in the state of Washington. Because the animal’s condition was attributed to complications from calving, the meat was considered safe for human consumption by the US Department of Agriculture (USDA). Tissues such as brain, spinal cord, and small intestine, which may have a higher likelihood of containing the pathogenic agent of BSE, were removed during slaughter and sent for rendering (often to be used as nonruminant animal feed).

Not surprisingly, international reaction was swift. Within a week, 53 countries had imposed a ban on imports of US beef and beef products. On December 30, the USDA announced new rules banning all downer cattle from the chain of human food production and other measures. Subsequently, the infected cow was discovered to have originated in Alberta, Canada, and was imported into the United States in September 2001.

Although this was the first case of BSE in the United States, more than 190,000 confirmed clinical cases have been reported worldwide since 1986, and approximately 184,000 cases were from the United Kingdom alone (see the images below). Additional information is available at OIE, Bovine Spongiform Encephalopathy (BSE). Based on mathematical modeling of the BSE epidemic, estimates suggest that 1-3 million cattle may have been infected with the BSE agent in the United Kingdom.
Most of these infected animals were slaughtered for human consumption before any clinical signs of BSE were noted. 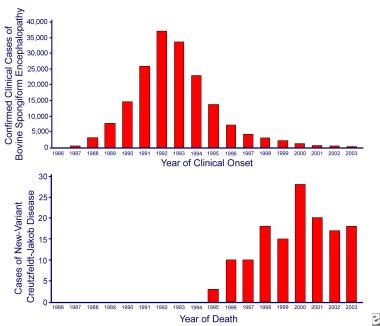 Incidence of bovine spongiform encephalopathy (BSE) and variant Creutzfeldt-Jakob disease (CJD) in Great Britain. The BSE epidemic peaked in 1992, 4 years after the introduction of the ban on ruminant feed. The associated human disease, variant CJD, was not defined until 1996, 7 years after a ban was introduced in Britain on the use of specified offal from cattle in human food. 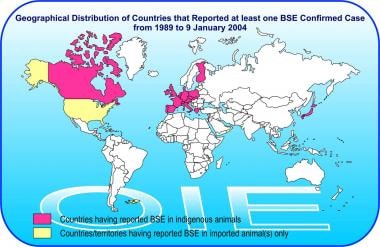 Geographic distribution of bovine spongiform encephalopathy (BSE) by country as of January 9, 2004. From http://www.oie.int/eng/info/en_esb.htm.

Other countries where BSE has been confirmed in native-born cattle include Austria, Belgium, Canada, Czech Republic, Denmark, Finland, France, Germany, Greece, Ireland, Israel, Italy, Japan, Luxembourg, Liechtenstein, the Netherlands, Poland, Portugal, Slovakia, Slovenia, Switzerland, and Spain. Additional cases of BSE have also been confirmed in North America: 9 in Canada (one cow was imported from the United Kingdom) and 3 in the United States (2 were imported from Canada). The third case of BSE reported from the United States was in a downer cow on a farm in Alabama, and the herd of origin could not be identified in spite of a thorough investigation.

A fourth case in the United States (the first since 2006) was detected as part of a screening program in California and did not enter the food chain.

Approximately 5 million head of cattle were slaughtered in the United Kingdom to halt the epidemic. Since 1992, the number of cases has decreased an average of 40% per year, although new cases continue to be reported. However, the preemptive slaughter crippled the British livestock industry and affected the tallow, gelatin, and pharmaceutical industries.

The incubation period for BSE ranges from 2-8 years. Most cases in the United Kingdom have occurred in dairy cows aged 3-6 years. The clinical features include the following:

Changes in temperament such as nervousness or apprehensiveness

Aggression toward other cattle or humans

Kicking when being milked

Difficulty in rising or walking

No treatment is available for BSE; the disease is relentlessly progressive until the animal dies or is destroyed. This usually occurs in 2 weeks to 6 months.

No test can detect the disease in a live animal, although in an epidemic setting, clinical features are sufficiently distinctive to provide a clinical diagnosis. Currently, 3 laboratory methods are used to confirm the diagnosis of BSE, including the following:

Microscopic examination of brain tissue, which shows characteristic changes, including a predominantly vacuolar spongiform change distributed uniformly throughout the brain

Different hypotheses are proposed regarding the origins of BSE. The most compelling hypothesis is that BSE originated from scrapie, an endemic spongiform encephalopathy of sheep and goats that has been endemic in Europe since the mid-18th century.
Scrapie has since spread to most sheep-breeding countries and is widespread in the United Kingdom, where, until 1988, the rendered carcasses of livestock (including sheep) were fed to ruminants and other animals as a protein-rich nutritional supplement. The epidemiologic data appear to implicate feed containing TSE-contaminated meat and bone meal, which was used as a protein source. The causative agent is suspected to be from either scrapie-affected sheep or cattle with previously unidentified TSE.

Changes in the rendering process that took place in the early 1980s, particularly the removal of a solvent extraction process that included a steam heat treatment, probably allowed the etiologic agent to survive, contaminate the protein supplement, and infect cattle. Recycling of infected bovine carcasses within the cattle population (turning the herbivorous cows into “animal cannibals”) amplified the levels of the pathogen, which had become adapted to cattle, in the feeds and eventually caused a full-scale epizootic.
Similarly, the spread of spongiform encephalopathies in farmed mink and captive and zoo animals may have resulted from prion-contaminated feed.

An alternative hypothesis was proposed in the controversial final BSE inquiry report in the United Kingdom that was released October 24, 2000, suggesting that a pathogenic mutation occurred in cattle in the 1970s, with BSE occurring as a consequence of recycling of infected cattle. The report asserts that BSE cases identified from 1986-1988 were not index cases, nor were they the result of the transmission of scrapie.

Recognition of the source of infection led to several countermeasures to break the cycle of cattle reinfection, restrict the geographic spread, and eliminate the potential source of new infection. The most important step was banning ruminant feed in 1988, extending it to include the feeding of specified bovine offal. By 1992, this ban started to bring the epidemic under control. See the image below. 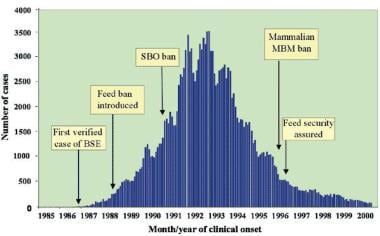 Furthermore, specified risk material, which comprises brain, spinal cord, eyes, tonsils, thymus, spleen, and intestine, is removed from all foodstuffs at slaughter.
In addition, cattle aged 30 months or older must not be used for consumption unless they test negative for BSE, which is known as the “over-thirty-month” rule.

Within weeks of identification of the first case of BSE, concern was expressed about human risk.
A national TSE surveillance was instituted in Britain in 1990 despite lack of evidence of human acquisition of scrapie based on the then-speculative grounds that exposure of millions of Britons to an apparently new bovine TSE might unmask low-frequency transmission in humans. Unfortunately, this fear proved to be well founded. The first cases of variant CJD (initially called new variant CJD) were reported in 1995.

By 1996, 10 patients, who had distinctive clinical and neuropathologic characteristics, had been reported to the National CJD Surveillance Unit with atypical CJD-like features. Clinically, they were younger than 40 years, with an average age of younger than 30 years; had behavioral symptoms, ataxia, and sensory changes early on; and progressed more slowly than in classic CJD. None had periodic complexes on EEG. Neuropathologic findings resembled those of kuru, with extensive florid plaques in which an amyloid core is surrounded by petals of spongiform change. The report concluded that this hitherto unrecognized variant of CJD was probably due to exposure to BSE.
So far, 217 cases of variant CJD have been described, most from the United Kingdom.

The risk factors for the development of variant CJD include younger age (as compared with classic CJD), residence in the United Kingdom, and methionine homozygosity at codon 129 of the prion protein gene (PRNP).
The encoding alternatives, methionine (Met) and valine (Val), are distributed in white populations in the approximate proportions of 50% Met/Val, 40% Met/Met, and 10% Val/Val. All patients with variant CJD who have been tested have been homozygous for methionine.
A reduced frequency of HLA class II type DQ7 has been described in patients with variant CJD but not in those with classic CJD; this may have important implications for understanding host susceptibility to infection by BSE prions.
Past surgery, previous blood transfusion, and occupation have not been shown to be associated with increased risk, although 2 cases have been reported in patients who received blood transfusions from donors who then went on to develop variant CJD.

Experiments in transgenic mice have shown that a significant species barrier exists that restricts the transmission of BSE to humans; however, the barrier is significantly reduced for human-to-human transmission, with increasing transmission efficiency from Met/Met to Met/Val to Val/Val genotypes.