Stereotactic surgery has made a resurgence in the treatment of Parkinson disease (PD), largely because of the long-term complications of levodopa therapy, which result in significant disability despite optimal medical management.
A better understanding of basal ganglia physiology and circuitry (see the image below) and improvements in surgical techniques, neuroimaging, and electrophysiologic recording have allowed surgical procedures to be performed more accurately and with lower morbidity. 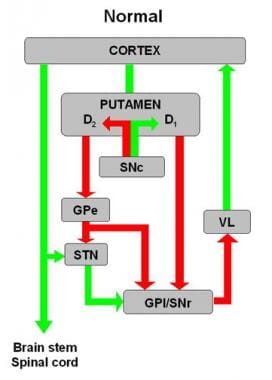 Stereotactic surgery is considered for PD patients who have motor fluctuations and dyskinesia that cannot be adequately managed with pharmacologic manipulation. The principal surgical option is deep brain stimulation (DBS), which has largely replaced neuroablative lesion surgery. Experimental surgical approaches include transplantation and gene therapy.

During stereotactic surgery, imaging data are correlated to a 3-dimensional space, permitting a target deep within the brain to be reached blindly and with minimal trauma. With frame-based techniques (see the image below), application of a reference coordinate system to the skull permits any point in the brain to be described with Cartesian (ie, x, y, z) coordinates. Ventriculography, an important method for target localization before the development of computed tomography (CT) and magnetic resonance imaging (MRI), is now rarely used. 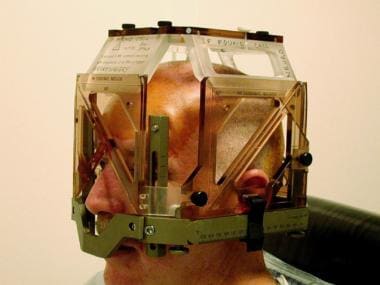 Stereotactic headframe is applied at start of surgery. MRI-localizing box is attached to frame only during targeting MRI. Localizer defines working volume of frame and provides reference coordinate system from which target coordinates are derived.

CT-guided stereotaxis provides direct imaging of brain parenchyma without image distortion; however, its gray-white resolution is inferior to that of MRI, and it can provide only axial imaging. MRI provides superior target resolution and triplanar imaging; however, some smaller targets may not be visualizable, and MRI is prone to image distortion. Although these distortions are usually small, they can affect targeting for functional neurosurgery.

The possibility of targeting errors due to image distortion necessitates the use of some form of intraoperative neurophysiologic monitoring to confirm correct targeting during surgery for movement disorders (see the image below). 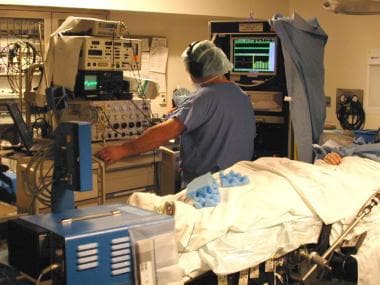 A comparative study suggests that an image fusion technique making use of stereotactic CT and MRI may be able to record a significantly longer subthalamic nucleus (STN) length through limited microelectrode recording than MRI alone can.
Further study is needed to determine whether this technique could be effectively used to improve clinical outcome and reduce morbidity.