Marchiafava-Bignami disease (MBD) is a rare condition characterized by demyelination of the corpus callosum. It is seen most often in patients with chronic alcoholism. (See Etiology and Pathophysiology.)

In 1903, Italian pathologists Marchiafava and Bignami described 3 alcoholic men who died after having seizures and coma. In each patient, the middle two thirds of the corpus callosum was found to be severely necrotic. Through the years, the medical literature accumulated hundreds of cases of MBD.
Most of these cases were found in alcoholic men.

With the advent of computed tomography (CT) scanning and magnetic resonance imaging (MRI), more cases of MBD have been recognized than before. Analyses of such cases have revealed several patterns, including scattered lesions or cysts observed at intervals from the front to the back of the callosum. Nearby areas (eg, anterior commissure, posterior commissure, brachium pontis, other white-matter tracts) and the centrum semiovale are frequently involved. (See Workup.)

In 2004, Heinrich et al described 2 clinical subtypes of MBD as follows, based on a review of 50 radiologic cases diagnosed in vivo
:

Type A – Has predominant features of coma and stupor; this subtype is associated with a high prevalence of pyramidal-tract symptoms; radiologic features include involvement of the entire corpus callosum

Type B – Characterized by normal or mildly impaired mental status; radiologic features are partial or focal callosal lesions (see the image below). 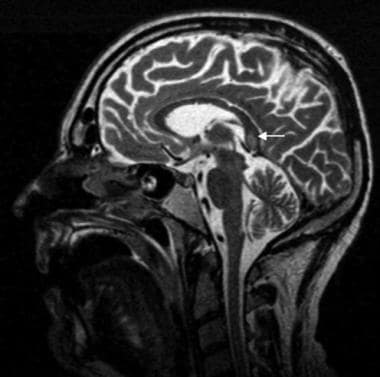 T2-weighted axial image in a patient with Marchiafava-Bignami disease showing a high-signal lesion in the corpus callosum.