Glycogen storage disease (GSD) type I, also known as von Gierke disease, is a group of inherited autosomal recessive metabolic disorders of the glucose-6- phosphatase system which helps maintain glucose homeostasis. Von Gierke described the first patient with GSD type I in 1929 under the name hepatonephromegalia glycogenica.
In 1952, Cori and Cori demonstrated that glucose-6-phosphatase (G6Pase) deficiency was a cause of GSD type I.
In 1978, Narisawa et al proposed that a transport defect of glucose-6-phosphate (G6P) into the microsomal compartment may be present in some patients with GSD type I.
Thus, GSD type I is divided into GSD type Ia caused by G6Pase deficiency and GSD type Ib resulting from deficiency of a specific translocase T1. These subtypes are clinically indistinguishable from one another, except for the fact that patients with GSD type Ib have altered neutrophil functions predisposing them to gram-positive bacterial infections.

GSD type II, also known as alpha glucosidase deficiency (GAA, acid maltase deficiency) or Pompe disease, is a prototypic lysosomal disease. Pompe initially described the disease in 1932. Its clinical presentation clearly differs from other forms of GSD, because it is caused by the deficiency of the lysosomal enzyme, alpha-1,4-glucosidase, leading to the pathologic accumulation of normally structured glycogen within the lysosomes of most tissues, differs Three forms of the disease exist: infantile-onset, late-onset juvenile and adult onset. In the classic infantile for, the main clinical signs are cardiomyopathy and muscular hypotonia (smooth and skeletal muscle). In the juvenile and adult form, the involvement of the skeletal muscle dominates the clinical presentation.
The images below illustrate histologic findings of GSD type II. 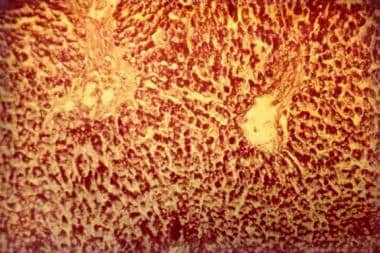 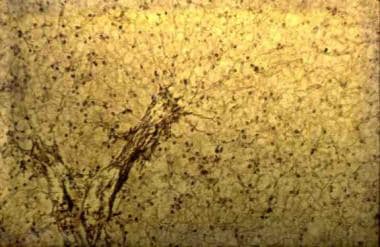 GSD type III is also known as Forbes-Cori disease or limit dextrinosis. It is an autosomal recessive disorder in which there is an AGL gene mutations which causes deficiency in glycogen debranchinging enzyme and limited storage of dextrin. The disease presents with variable cardiac muscle, skeletal muscle and liver involvement and has different subtypes. GSD IIIa is the most common subtype, affecting about 85% of patients with this disease. GSD IIIb is less severe and less common, affecting 15% of patients with the disease.
In contrast to GSD type I, liver and skeletal muscles are involved in GSD type III. Glycogen deposited in these organs has an abnormal structure. Differentiating patients with GSD type III from those with GSD type I solely on the basis of physical findings is not easy.

GSD type IV, also known as amylopectinosis, Glycogen Branching enzyme deficiency (GBE) or Andersen disease, is a rare disease that leads to early death. In 1956, Andersen reported the first patient with progressive hepatosplenomegaly and accumulation of abnormal polysaccharides. The main clinical features are liver insufficiency and abnormalities of the heart and nervous system.

GSD type V, also known as McArdle disease, affects the skeletal muscles. It is an autosomal recessive disorder in which there is a deficiency of glycogen phosphorylase.McArdle reported the first patient in 1951. Initial signs of the disease usually develop in adolescents or adults. Muscle phosphorylase deficiency adversely affecting the glycolytic pathway in skeletal musculature causes GSD type V. Like other forms of GSD, McArdle disease is heterogeneous.

GSD type VII, also known as Tarui disease, arises as a result of phosphofructokinase (PFK) deficiency. The enzyme is located in skeletal muscles and erythrocytes. Tarui reported the first patients in 1965. The clinical and laboratory features are similar to those of GSD type V.