Buruli ulcer, caused by Mycobacterium ulcerans, is a chronic, debilitating, necrotizing disease of the skin and soft tissue. Buruli ulcer is an emerging infectious disease and is the third most common mycobacterial disease of the immunocompetent host, after tuberculosis and leprosy.
Although it has been reported in over 33 countries around the world, the greatest burden of disease is in the tropical regions of West and Central Africa, Australia, and Japan.
It primarily affects children aged 5-15 years.
Buruli ulcers generally begin as a painless dermal papule or subcutaneous edematous nodule, which, over a period of weeks to months, breaks down to form an extensive necrotic ulcer with undermined edges. Treatment includes a prolonged course of antibiotics and surgical debridement. Early identification and treatment are key, as lesions heal with scarring that can be a significant source of morbidity. Other names for this entity include Bairnsdale ulcer, Daintree ulcer, Mossman ulcer, and Searl ulcer. Note the image below. 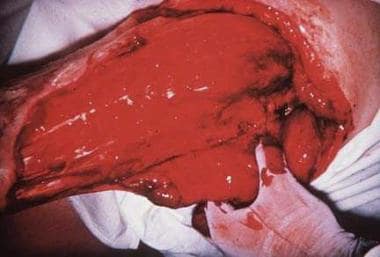 Buruli ulcer can extend to 15% of a person’s skin surface and may destroy nerves and blood vessels. Metastatic bone lesions may develop.

Buruli ulcer was first described by Sir Albert Cook in patients from Buruli County in Uganda, and the causative organism was isolated in 1948 by MacCallum in the Bairnsdale region of Victoria, Australia. A reemergence of cases led the 1998 World Health Organization (WHO) to reclassify Buruli ulcer as a “neglected emerging infectious disease,” which has stimulated ongoing research into diagnosis, pathogenesis, and effective treatment.