The APS diagnosis should meet the revised Sapporo criteria (also called the Sydney criteria) for definite APS. The criteria, developed by consensus among international clinical and laboratory experts, were originally referred to in 1999 as the Sapporo criteria
and then modified at a meeting in Sydney in 2006.

The primary diagnostic criteria include arterial thrombosis, venous thrombosis, recurrent fetal loss, and thrombocytopenia. One of the listed primary criteria is required for diagnosis, combined with a sustained elevated titer of immunoglobulin G (IgG) anticardiolipin or lupus anticoagulant, which can be detected based on the prolonged activated partial thromboplastin time (aPTT), Kaolin clotting time, or dilute Russell Viper venom time.

Livedo reticularis is a presenting sign in up to 40% of patients with the diagnosis of SLE.
Skin changes defined as livedo reticularis are violaceous, red or blue, reticular, or mottled pattern of the skin of the arms, legs, and the trunk. They are not reversible with rewarming.

No studies are available to show the usefulness of prophylaxis in patients with antibodies in the absence of thrombosis. Some authors suggest using low-dose aspirin in patients with persistent lupus anticoagulant or high levels of IgG anticardiolipin. Some patients with antiphospholipid syndrome may have resistance to a usual dose of subcutaneous heparin. Low molecular weight heparins may prove beneficial because of improved safety and efficacy profiles (eg, decreased bleeding, risk of osteoporosis and thrombocytopenia, prolonged half-life, increased bioavailability). The protective effect of hydroxychloroquine against thrombosis has been reported in patients with systemic lupus erythematous.

Warfarin-induced skin necrosis is an uncommon serious complication of oral anticoagulation therapy (see the image below). 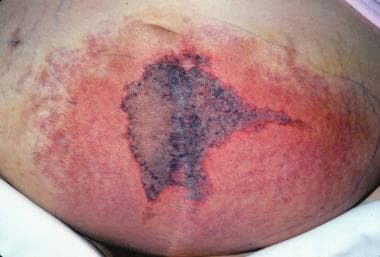 Warfarin-induced skin necrosis is estimated to occur in 0.01-0.1% of patients treated with anticoagulants. Approximately 85% of reported patients are women. The most commonly affected sites are the breasts, buttocks, thighs, and abdomen, possibly because of the abundance of small dermal blood vessels in fatty tissue. Less usual locations include the external ear skin,
eyelids,
penis,
or digits.
A classic pattern of skin changes occurs when the condition commences. The initial nonspecific symptom may be a sensation of pain or cold in the affected area, followed by the development of a well-demarcated erythematous lesion that progresses to bullae formation and full-thickness skin necrosis. Areas of erythematous flush may become edematous and have a peau d’orange effect. The eschar may eventually slough or require extensive surgical debridement.

Most cases of warfarin-induced skin necrosis occur within the first week of warfarin administration, although rare cases of late onset are reported.
Biopsy specimens of lesions reveal involvement of the dermis and the subcutaneous tissue characterized by fibrin deposition in the small veins and postcapillary venules, with hemorrhage and diffuse necrosis in the dermis and the subcutaneous fat. Absence of arterial thrombosis is another characteristic feature.

Differential diagnoses include necrotizing fasciitis, venous gangrene, pyoderma gangrenosum, and cholesterol embolization syndrome. Warfarin is believed to induce a relative hypercoagulable state by interfering with the natural anticoagulant pathways (eg, those involving protein C, protein S, and antithrombin). A substantial minority of cases occurs in association with a familial deficiency of protein C or protein S. An acquired deficiency of protein S secondary to the development of antiphospholipid antibodies has been implicated. There is increasing recognition of the fact that skin necrosis could be the first presentation of heparin-induced thrombocytopenia.

Patients receiving large, rapidly administered loading doses of warfarin are at particular risk. Identifying patients at risk (eg, patients with a previous episode, protein C or protein S deficiency, or antiphospholipid syndrome), avoiding excessive initial doses of warfarin, and administering vitamin K in the early stages of lesion development can prevent warfarin-induced skin necrosis. If lesions have already progressed, oral anticoagulation agents should be discontinued. In some patients, attempts have been made to reverse the anticoagulation with plasma, and, in patients with documented protein C deficiency, concentrates of protein C have been used. Anticoagulation with heparin should be continued until the necrotic lesions heal. Despite treatment, approximately 50% of patients ultimately require skin grafting.