Mucous membrane pemphigoid (MMP), also known as cicatricial pemphigoid, refers to a group of rare chronic autoimmune blistering diseases that predominately affect the mucous membranes, including the conjunctiva, and occasionally the skin. Patients with cutaneous involvement present with tense blisters and erosions, often on the head and the neck or at sites of trauma. Scarring of the mucous membranes is common, hence the designation cicatricial, which can lead to decreased vision, blindness, and supraglottic stenosis with hoarseness or airway obstruction. The first international consensus on mucous membrane pemphigoid was published in 2002. 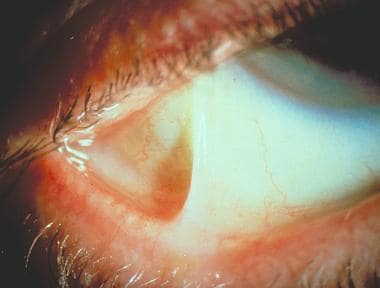 Ocular manifestations of cicatricial pemphigoid (mucous membrane pemphigoid) include symblepharon, demonstrated in this photograph by the tethering of the lower lid to the cornea.